Found in our Archives

BACK TO VIRTUAL TOUR

During the Golden Age of Amelia Island, baseball was one of the most popular sports. Baseball games were played on a field behind what is now City Hall on Ash Street. According to an 1882 edition of the Florida Mirror, one of the local teams’ uniforms consisted of, “white flannel shirts, knee breeches, red stockings, and derby-style straw hats.”

This particular bat belonged to Edwin R. Williams, who was at one time Clerk of Circuit Court in Jacksonville. The bat is wooden with two metal bands, one of which reads, “Champion Amateur BB Club of Florida from Bennett & Mulroy.” 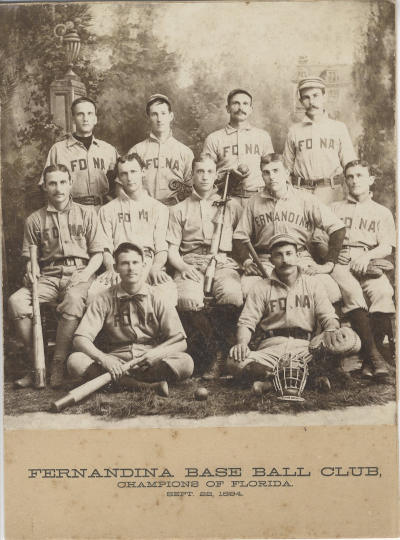 Edwin R. Williams is pictured here in the back row, second from the left. He played first base. September 22, 1894.