ABOUT OUR BROWN BAG PROGRAM

The Amelia Island Museum of History’s Brown Bag Lunch lecture series presents lunchtime conversations with fascinating members of the Nassau County community. Join us at 12pm on the first Wednesday of every month to learn from the people who make our community so vibrant! Audience members may bring lunch to eat during the lectures. Attendance is free and open to the public.

In this Brown Bag Lunch, the St. Marys Tall Ship Alliance Founder and current President, John Royall, will discuss the mission of his organization and the history of tall ships.

Attendance is free and open to the public and attendants may bring their lunch. Seating is limited on a first come, first served basis. This program is wheelchair accessible. 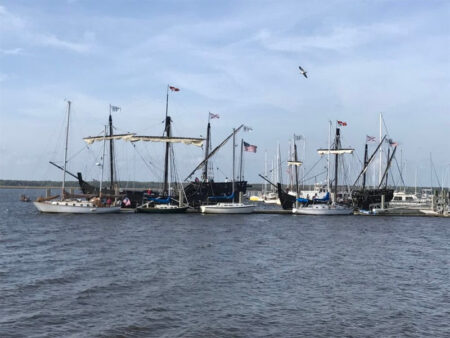 Watch this program remotely on our Twitch Channel

For Future Programs check out our Event Calendar

In 1564, artist and cartographer Jacques Le Moyne arrived in present-day Jacksonville as part of France’s attempt to establish a Huguenot settlement. Le Moyne painted his surroundings: flora, fauna, and the Timucua natives.

Years later, these images were turned into engravings and sold to the public by Belgian engraver Theodore de Bry. The engravings were accepted for years as true recreations of Le Moyne’s firsthand Florida sightings, but more recently, scholars argue that these works were heavily fabricated. Summer Bias, Curator at the Amelia Island Museum of History, will discuss this early-Florida art mystery.