In 1975 the Duncan Lamont Clinch (DLC) Historical Society formed a committee to plan for the creation of a museum which would collect items and interpret Amelia Island history. Around the same time, William Decker, the caretaker at Ft. Clinch, was amassing thousands of historical documents, artifacts and books focusing on local and natural history. His son, Doug Decker, inherited his father’s vast collection and felt it needed to be shared with the community.

In 1977, a board of 15 trustees, drawn from the original committee, incorporated themselves as a non-profit cultural institution under the name of the “Fernandina Historical Museum,” with Edith Ferguson Shurley as president. The group began to raise funds and to look for a permanent home for this incredible collection. They also hired Barbara Stidfole to begin cataloguing the collection. The Museum group convinced the City of Fernandina Beach to purchase a portion of the Decker collection to jumpstart the safeguarding of local history. The City subsequently donated the collection to the Museum, which stored the artifacts in the old schoolhouse on Atlantic Avenue.

As a first step, DLC Historical Society convinced CSX to donate the old railroad depot at Front and Centre Streets to the Historical Society for the purposes of a Museum. They then asked the City to become the caretaker of this historic building. The first occupant was the Chamber of Commerce. In 1978, the Chamber of Commerce agreed to share the Depot Building, and the first Museum opened in the old Train Depot. While small, the Decker Collection finally had a home and portions of it were combined with traveling and rotating exhibits from the Smithsonian, Ft.Clinch, and the George Davis Collection of historic photos. 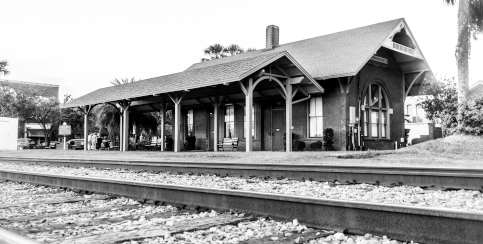 Nassau County built a new jail in Yulee in 1979. The old jail at North 3rd and Cedar, was in significant disrepair, with rusty, leaking pipes and peeling paint. The Museum approached the County Commission about using the facility for an expanded Museum, and the Commission offered the Museum a 99-year lease on the building and grounds at $1 per year. Volunteers worked incessantly to create a functional exhibit space, tearing out old bars on windows and clearing a clean space for exhibits. This new Museum needed a new name, so they created a contest for school children to rename the Museum. The winner was the “Eight Flags Museum of Nassau County,” which would extend the geographical focus of the Museum’s historical message. Dorothy Groshell became the first full-time Museum Director. Portions of the Decker Collection were put on display with traveling exhibits located on the first floor of the building, and classroom tours and summer camps soon began in an effort to reach out to the community. In 1982, a new room was cleared to house the Museum’s growing Victorian-era collection and a multi-media room was created as well. Susan McCranie Siegmund, President during this early period, credited the success of the Museum to “the individual efforts of many people,” including volunteers, members, and local contributors.

ANOTHER NAME CHANGE, A DIFFERENT DIRECTION

In an effort to boost local interest and distinguish the Museum statewide, an association was established with the Northeast Florida Railway Historical Society in 1984. The Museum was renamed the “Florida Museum of Transportation and History” and designated the “official transportation Museum of the State of Florida.” Museum trustees began to collect transportation artifacts and even constructed a mini railroad track within the Museum. The redefined purpose was to “tell the story of the first cross-state railroad in Fernandina in the 1860s until the present day.” After a year or so, the transportation theme lost steam, and the Board of Directors began to search for a new inspiration to keep the Museum alive. 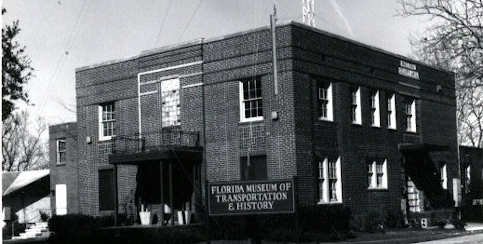 Volunteer Deon Jaccard brought the Museum back to life by returning to the story of the Eight Flags, resurrecting former display stands and framed flags used in the first Museum effort. But most importantly, she created a true ‘Spoken History’ of Amelia Island’s over 4000-year history, a tradition that carries on to this day. Aided by local historians Helen Litrico, George Davis, and Suzanne Hardee, she began to inspire, recruit and train volunteers to become tour guides for an “Eight Flags” journey. With these changes, the Museum went through its fourth and final name change, to the current name, The Amelia Island Museum of History. One of the founders, Bob White, stated that “Deon did so much work. She is the one who really put us on the map.” She was also instrumental in the creation of historic district walking tours.

As a way to show their support for the Museum, the County Commission donated the building in the late 1980s. Other exhibit areas were added over the years and the Museum retained the same permanent exhibits for 17 years. In 2003, the Museum completed an almost half million-dollar renovation, creating all new professionally-designed exhibits throughout the first floor. A modern archive and research facility on the 2nd floor and the expansion of outreach programs to the community brought greater visibility to the Museum’s efforts to preserve and protect local history.

In 2018, the Museum kicked off a $400,000 Capital Campaign to replace all exhibits on the first floor in a completely redone space. Current Executive Director Phyllis Davis backed by a strong 16-person Board, saw the project through to completion. Walls were removed, technology added, and stories edited to create a more balanced view of the complicated history of Amelia Island. In addition, the County released a Reverter Clause on the building, giving the Museum sole ownership of the property. An additional $160,000 was spent to stabilize, repair and protect the building for years to come. Hundreds of volunteer hours reduced the cost of both these efforts, making the Museum financially strong as it moves into its next ‘life’ as the caretaker of the amazing, complicated and sometimes almost unbelievable history of this place we all now call home, here at the water’s edge.