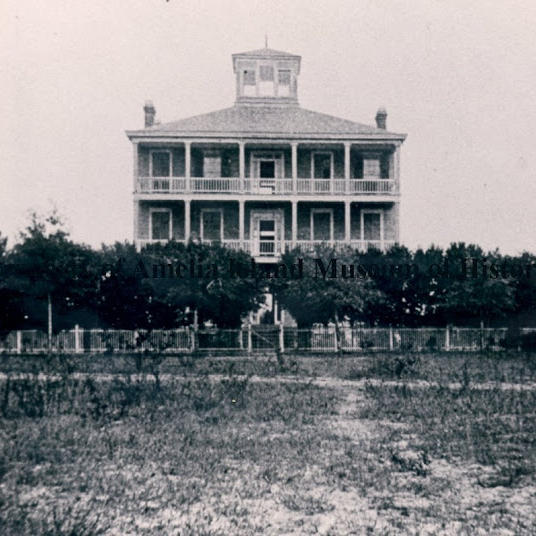 Somewhere between 11th and 12th streets in the woods behind the Nassau School Board, there once stood a beautiful three-story mansion surrounded by a grove of citrus trees. The house was built in the 1850s for an Irish immigrant named Joseph Finegan, who had made a name for himself in Jacksonville as a lumber mill operator, a lawyer, and as one of David Yulee’s partners in the Florida Railroad. By the time his mansion was completed, Finegan had established himself as a significant property owner and slaveholder in Fernandina

However, Finegan would not be able to enjoy his home. In 1861 he and a number of delegates to the Florida Secession Convention voted to secede from the United States, which made Florida the third state to secede following South Carolina and Mississippi. With the outbreak of the Civil War, Finegan joined the Confederate army and eventually attained the rank of Brigadier General. When the United States reclaimed Fort Clinch in 1862, Amelia Island became a refuge for free black people, former slaves, and a handful white Unionists, as well as a small number of pro-Confederate whites who could were unable to leave in time. Freed people comprised a substantial majority of the population; although the official army census of 1864 recorded 361 white and 892 “colored” civilians living in the vicinity of the post at Fernandina, Chloe Merrick observed that there could have been as many as 1,200 freed black people when she arrived.

Unfortunately, the chaotic conditions created by the war contributed to a growing orphan crisis on Amelia Island. A high number of displaced and orphaned children (most of them black but some white) struggled for food and shelter. Many lived in abandoned houses and sheds, often facing “jail like” conditions and outbreaks of disease. Others became targets for exploitation by unscrupulous adults. Chole Merrick noted at least one incident in which freed children worked for an unrelated older woman like slaves.

Chloe Merrick and the Orphanage

In an effort to combat the growing orphan crisis, Chloe Merrick established an orphanage asylum on the island. The Florida Times-Union would later call Merrick’s orphanage “the first orphanage asylum in Florida,” a bold claim that may or may not be accurate.

Chloe Merrick was an educator and an abolitionist from Syracuse, NY, who would eventually become a first lady of Florida. During the Civil War she traveled down to the Sea Islands to help teach children through the Freedmen’s Bureau. Merrick’s school operated primarily out of St. Peter’s Episcopal Church in downtown Fernandina. However, her work with the children of Fernandina convinced her that there was more work to be done outside realm of education, especially for the recently freed black orphans on the island.

Fortunately for Merrick, the creation of Florida’s Direct Tax Commission in 1863 allowed for the seizure of property from Florida citizens who did not pay taxes to the Federal Government. This meant that property owned by Confederate soldiers and pro-Confederate civilians, who often were unable or unwilling to pay Federal taxes, was seized and sold or leased to other individuals. Following the seizure of Brigadier General Joseph Finegan’s estate, Chloe Merrick was able to buy the property for $25 for the purpose of establishing an orphanage.

Merrick’s letters to a newspaper in Syracuse indicate that several black families were already living in the Finegan house. In all likelihood these families were some of Finegan’s former slaves who moved into the mansion after the Confederates retreated from the island. The 1860 slave schedule indicates that Finegan owned 12-15 slave in the town of Fernandina.

When Merrick visited the house she found the families “very destitute, without exceptions, but we have yet to find the first family who do not prefer their present situation to their former as slaves.” Whether Merrick ushered these families out of the mansion after she purchased the property, or whether she permitted them to stay, is unknown at this time.

Merrick’s orphanage was largely successful in addressing the needs of a large number of orphans and refugee children in Fernandina. In its third year there were at as many as 70 orphans living in the Finegan house, according to one census estimate provided by 1st Lt. Charles Coolidge in 1865. The orphans were well cared for and consisted of, according to one observer, “a more healthy and happy lot of children I have rarely seen.”

Despite its obvious success, the orphanage proved expensive to maintain, consuming considerable time and energy from a limited staff. The operation costs of the orphanage forced Merrick to spend much of her time fundraising, which included frequent trips to New York and other parts of the Union to gather donations of cash, clothing, and supplies.

Still, Merrick and her staff were able to make use of what they were given to help as many people on the island as possible.

In particular, they soon found themselves trying to confront other social issues such as the sexual exploitation of black women by white Union soldiers. We really do not fully know this part of the story and what lengths Merrick and her staff went through to address these problems, but Merrick wrote home about at least one young woman–a former student of hers–who found herself in this position. Merrick also alluded to a number of other black women in similar circumstances, abandoned by white Northern soldiers who left them alone with newborn children.

This is to say nothing about the extent to which Union soldiers or civilian men committed violence against women and children on the island. All I will say is that at some point Merrick became so disheartened that she found herself writing home to Syracuse exclaiming, “God, what lessons art thou teaching the nation in this scourge thou art permitting to visit this oppressed people?”

What Happened to the Orphans

By the beginning of Reconstruction, the Federal Government began to take a more forgiving stance toward Confederates. When the rebels began to return to their homes and found much of their property repossessed, sold, or rented out, they began to clamor for the return of their former property. In the summer of 1866 the Freedmen’s Bureau ordered Merrick to return the Finegan estate to Joseph Finegan, who by then was probably mortified to see several dozen free black children living in his mansion.

The orphanage was moved out of the Finegan home to a new location around Jacksonville and within another year was closed for good. I do not have access to any of the records of the orphanage (if they exist they are probably among other Freedmen’s Bureau papers at NARA in Washington). Nevertheless, we do know that many of the orphans were either shipped out of state to other Freedmen’s institutions in the Carolinas, while the remainder were placed in apprenticeships around North Florida.

Of Fernandina’s orphans who entered this apprentice system, only so much that can be said. Apprenticeships under Reconstruction were often designed to co-opt young black people as an unpaid labor force for merchants and former slaveowners in exchange for room and board. It is possible that some of the orphans may have gone to work for Joseph Finegan or other prominent citizens of Fernandina, although this is pure speculation.

In the end, Finegan sold his reclaimed house and property to the Episcopal Bishop Young, who turned the building into a white girl’s school called St. Mary’s Priory. Today, nothing exists of the original building. The plot of land where it stood is somewhere with a marshy wooded area behind the Nassau County School Board Office on Atlantic Avenue.

*Disclaimer: The views expressed in this post belong solely to the author and do not necessarily represent the Amelia Island Museum of History*