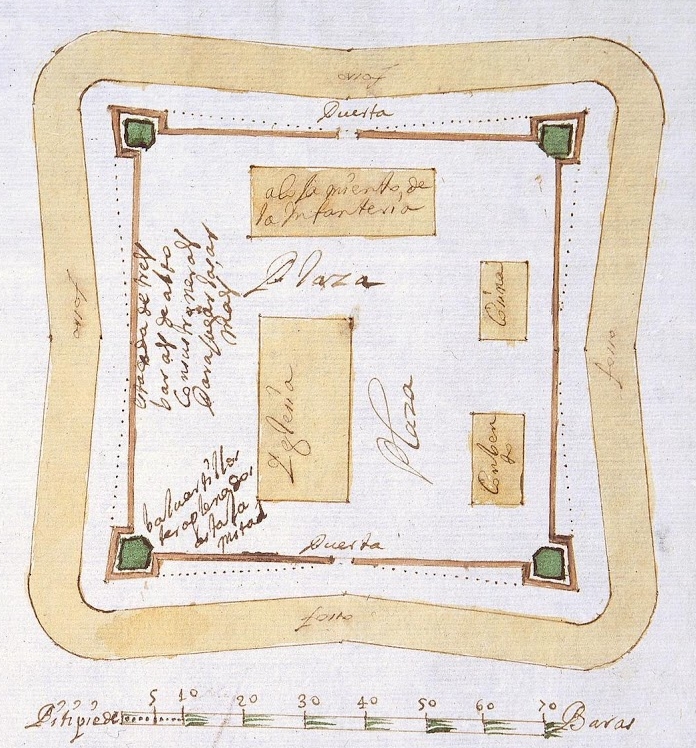 In 1702 James Moore, the governor of Carolina, organized an assault on Amelia Island and the east coast of Spanish Florida. He embarked from Port Royal in November, striking at mission towns along the coast en route to Saint Augustine. On November 4, 1702, he burned Amelia Island’s missions to the ground and scattered the Indians living on the island.

In order to get a sense of the events leading up to James Moore’s raid, we need to take a quick look at what was happening along the Georgia coast. By the turn of the eighteenth century, Amelia Island was the rearguard of a fifty-year Spanish retreat from the Georgia coast and was home to three mission towns, which were made up of the remnants of Spanish-allied Indian villages that once occupied the land between the Savannah River and Saint Mary’s River.

Spanish mission towns served multiple purposes: they converted Indians to the Catholic Church; helped organize the Spanish labor draft of Indian workers; provided a measure of defense for subjected Indian people; and served as a nucleus for the social lives of Christianized Indians, who had to adapt to the realities of life under the Spanish Empire. In northeast Florida these missions served another purpose: they provided a buffer zone against the English colonies of Virginia and Carolina.

In 1655 there were at least ten Spanish mission towns spread between the Saint John’s River and the Savannah River. By 1702 only five missions remained, including three which had been evacuated to Amelia Island.

The Spanish retreat created a power vacuum along the Georgia coast, emptying what had once had been a buffer against the English colonies. The Spanish had intended to strengthen their defenses against an English assault by consolidating smaller villages around a handful of island mission towns. To their credit this decision helped to mitigate the threat of attack by Indian raids coming from the mainland.

Notorious pirate Michel de Grammont, who raided Spanish Missions in the Mocama Province Unfortunately, because the Spanish could not properly fortify and garrison these island towns, attacks from the sea became more devastating. At least two major pirate raids demonstrated that seaborne raiders could disembark and and strike coastal towns with ease. Furthermore, the decision to cluster these towns together on islands like Amelia only made these attacks worse, foreshadowing James Moore’s 1702 raid on the island.

In the words of historian Charles Arnade, James Moore was “an ‘impecunious planter,’ a high church man and a heartless slave trader.” Few records of him still exist, but a decent biography can be made of the man. Moore was probably born around 1650 and spent his early life in the colony of Barbados. It has been suggested by a few historians that he was a son or close relative of Rory O’Moore, the leader of the Irish Rebellion of 1641. This, however, is unlikely, since James was militant high church Anglican for most of his life).

Around 1675 James Moore took part in a large migration of English colonists from Barbados to the recently-founded colony of Carolina. Almost immediately Moore began to establish himself with people of power and influence in the colony. He married acquired land and quickly distinguished himself as a point of contact in the Indian trade.

During this time, Moore earned the respect of a political faction known as the “Goose Creek Men,” which consisted of planters and slave traders who lived in the town of Goose Creek. The Goose Creek Men often coordinated Indian slave raids against their southern neighbors. They were especially aggressive in taking slaves from the mission Indians in La Florida, as those Indians were Catholic and allies of Spain.

In fact, the Goose Creek Men and their Indian allies were involved in pushing Spanish mission down the coast. Their slave raids against La Florida caused a great deal of fear for Spanish-allied Indians, who were evacuated south. The Mission of Santa Catalina de Guale, for instance, moved twice in its history: once from Saint Catherine’s Island to Sapelo Island, and then again to Amelia Island. In this way, James Moore and his associates were unknowingly setting the stage for a devastating invasion of Spanish Florida.

After Carolina Governor Joseph Blake’s death in 1702, James Moore launched a successful bid to become his successor. Moore’s ascendancy ensured that the interests of the Goose Creek Men were firmly entrenched in Carolina’s government. Governor Moore’s next objective was to use his newfound position to weaken Spain’s grip on Florida, not only for strategic reasons, but also because he benefited from the trade of enslaved Indians from Spanish territories.

The outbreak of Queen Anne’s War gave him the perfect casus belli for an invasion of Florida. The English were concerned that if Spain’s French allies in the Gulf of Mexico decided to reinforce Florida (or worse, attack by land from the west), then France and Spain would be able to challenge England’s hold over Carolina. Therefore, the colonial government granted Moore £2,000 to fund an invasion force. Governor Moore recruited approximately 500 English colonists and 370 Indians (mostly Yamasee) for the invasion, as well as 14 small ships and watercraft. They mustered in Port Royal and disembarked on November 2nd, 1702.

The English flotilla, led by James Moore and Robert Daniell, began its assault on Amelia Island on the night of November 3rd. Robert Daniell led the offensive, while Governor Moore stayed with the ships as they sailed down the coast. Daniell’s men first destroyed the northern guard house of San Pedro Bar, which overlooked the exit of the Saint Mary’s River, probably near the current location of Fort Clinch. The English then swiftly attacked and razed the nearby mission village of San Pedro de Tupiqui. It is uncertain if the English took Indian captives as slaves, but it’s entirely likely.

A fairly large number of Indians from Tupiqui fled south to the towns of San Felipe and San Catalina on the south side of Amelia, around 1 am in the morning of November 4th. Guale’s lieutenant governor, Fuentes de Galarza, attempted to raise a defense of the village of San Catalina, but his plans failed for two reasons.

First, most of the Indians were terribly frightened of the English advance. Those who fled from Tupiqui brought exaggerated reports of the violence committed by the invaders. Soon many of the inhabitants of San Catalina and San Felipe were beginning to flee the island altogether rather than face the English assault head on.

Why was the fort unfinished? We know from Spanish records that the Guale who lived on Amelia Island had trouble finding and transporting the right kind of wood to the site. Additionally, there were not enough abled-bodied workers for the project. Only a couple hundred Indians were left on Amelia Island at the time, and they still had to fulfill the labor draft for the government on Saint Augustine.

Perhaps this would have ended differently had the Spanish finished the fortifications at Amelia Island and properly garrisoned them. Or, perhaps as the English feared, if Spain’s French allies in Louisiana assisted in fortifying key locations in La Florida before Moore’s raid, then Moore would not have been able to accomplish as much without resistance.

Either way, the Spanish were unable to recover their losses from James Moore’s raid, and the remaining mission Indians from Amelia Island were relocated to Saint Augustine until Florida was traded to England in 1763.

Today the museum is in possession of two objects associated to the raid: the charred doorsill of the Santa Catalina Mission and a replica of the friar’s stamp for the mission, both of which are on display in the Spanish Mission room.

Worth, John E. The Struggle for the Georgia Coast: an Eighteenth Century Spanish Retrospective on Guale and Mocama. Anthropological Papers, No. 75. American Museum of Natural History, 1995.