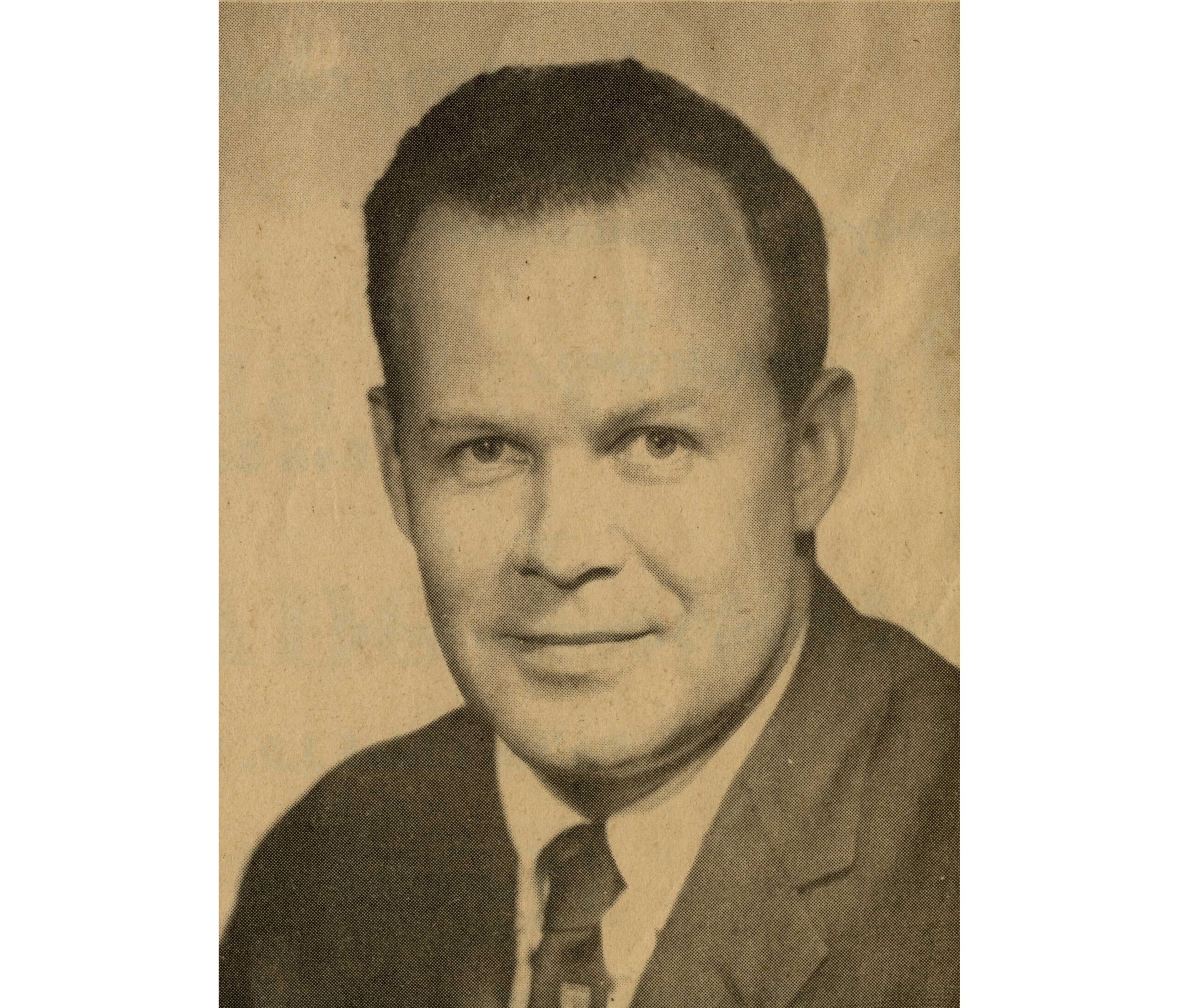 The History of the Amelia Island Plantation

Today, Amelia Island is probably best known as a tourist destination. It can trace those roots back to David Yulee’s Florida Railroad in the 1850s. However, the person most responsible for launching the local tourist industry we know today may well be Charles Fraser.

Fraser’s father was a timber baron who owned a portion of a company that was harvesting trees from Hilton Head, SC, in the early 1950s. Fraser became enamored with the island and saw potential. He convinced his father to give him part ownership in the land once the timber was cleared then headed off to study business at the University of Georgia and law at Yale. Upon graduating, he drafted a land-use plan and sold the first lots of the Sea Pines Plantation on Hilton Head in 1957.

Sea Pines was a smashing success and Fraser moved on to developments in Virginia, North Carolina, and Puerto Rico. Next, he set his sights on Cumberland Island, the large undeveloped barrier island to Amelia’s immediate north. Cumberland was (and is) largely unmolested, so the concept of its development didn’t sit well with many. Eventually, enough political and social pressure was put upon the project that it became unviable. Fraser sold his holdings there to the National Park Service in 1971 and the island was designated as a National Seashore.

Meanwhile, a few miles south on Amelia, the Union Carbide company owned most of the southern end of the island. They had planned to strip mine most of the land there for titanium. However, there were complications with that project and Union Carbide had other holdings that were proving to be more profitable. Amelia Island just never became their priority. As Fraser’s Cumberland project was falling apart, he saw the Union Carbide land just several miles away as an opportunity. Late in 1970, he closed on the property for $4,650,000. 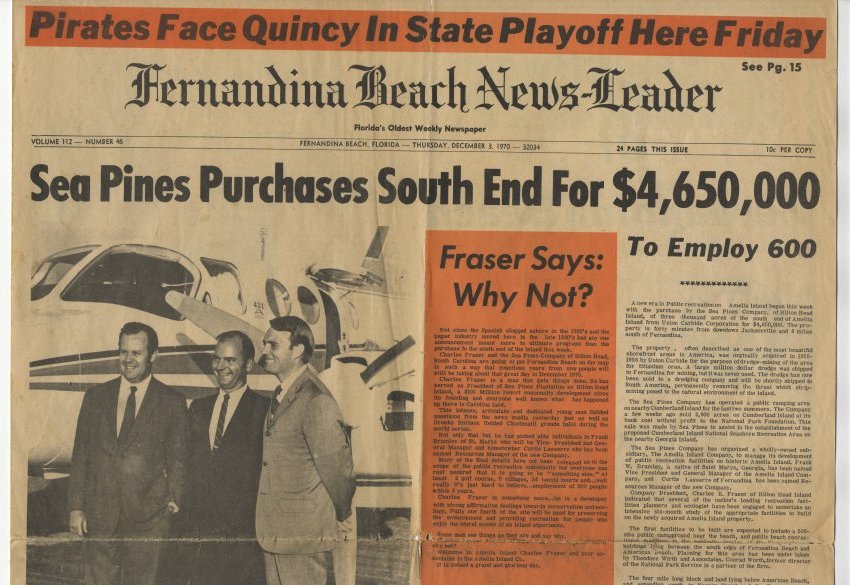 The master plan for Amelia Island Plantation was revealed in 1972. At its core was the concept of preserving the natural setting and incorporating that into the development. Indeed the original plan called for the natural preservation of more than 50% of the land, not including marshes, and density that would not exceed 1.6 residential units per acre.

The early marketing of Amelia Island Plantation focused heavily on this. It was also billed as a haven for tennis and golf. International tennis stars John Lloyd and Chris Evert, a couple at the time, cut deals to become property owners in exchange for becoming the faces of much of the marketing. Eventually the resort even hosted a women’s professional tennis tournament sponsored most notably by Bausch and Lomb, until 2008.

Fraser’s company was successful in selling parcels of property on Amelia Island and moved forward with other projects in Florida and South Carolina. Unfortunately, a global recession took hold in the early 1970s. This spelled trouble for the company and it wasn’t long before it was forced into bankruptcy. The Palmas Del Mar project in Puerto Rico was particularly problematic.

In 1975, Sea Pines Company lost control of Hilton Head and in 1976 Amelia Island Plantation was sold to Richard Cooper Investments. Cooper expanded operations on the property with additions like the Conference Center, Long Point Golf Club, and Osprey Village. Cooper was wise to retain Sea Pines’s Vice President, Jack Healan, who would eventually become the President of the Amelia Island Plantation Company and a legend in the Florida tourism industry. 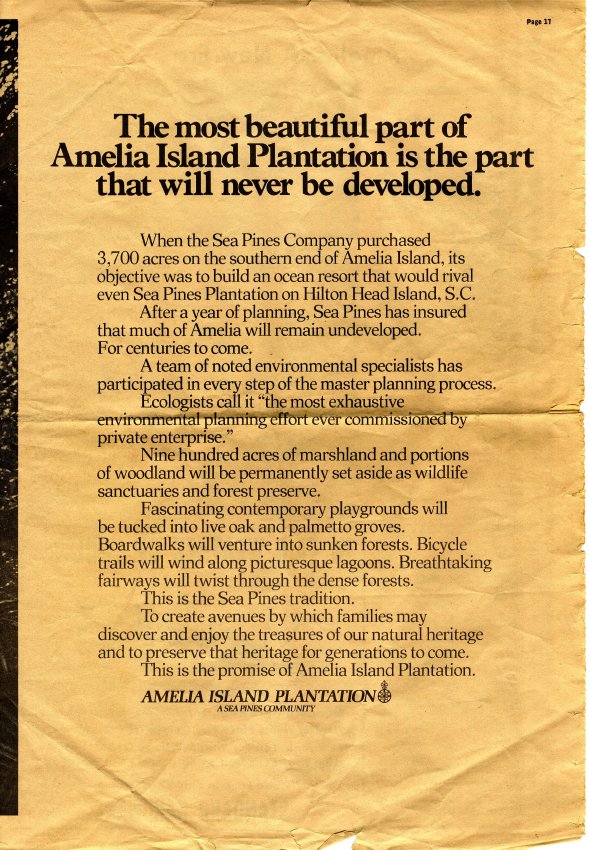 Local tourism thrived under Cooper and Healan’s leadership. New people discovered the island. Some of those were tourists; others came to capitalize on the Amelia’s new status as a high end resort community. Before Sea Pines came along, locals might have worked at one of the paper mills or in the network of small mom and pop businesses that basically existed to support each other. However, in the 1970s the local population mushroomed as a new wave of residents came in who would establish a new dynamic in the once sleepy town. Brothers Ralph and Steve Simmons, for example, came from Statesboro, Georgia to become the Vice President of Amelia Island Plantation and owner of Fernandina Beach Realty, respectively. Ralph led efforts to preserve land along the St. Marys River near Hilliard. That area is now a state park that bears his name. Steve would become among the best-known real estate agents in the area.

Through the 1980s, the rest of Amelia Island started to catch up with the progress happening at the south end, and so much of the local focus turned from paper to tourism. The Ritz Carlton Amelia Island opened in 1991 and solidified the island’s new prominence as a national or even international resort destination.

Recession would once again affect Amelia Island Plantation. The 2008 recession brought a negative cash flow to the property and Amelia Island Plantation Company, still owned by Richard Cooper, filed for Chapter 11 bankruptcy in 2009. The following year, The Omni Corporation bid on the resort at an auction in bankruptcy court and took control by 2012. As a sad footnote, Charles Fraser was killed in a boating accident in the Caribbean in 2002.

The Omni Amelia Island Resort has been re-established as a desirable destination for sun seekers and corporations looking to hold retreats and conferences. The Ritz Carlton Amelia Island can boast the same. Its signature event, Amelia Island Concours d’Elegance, was first held in 1996 under the direction of Jacksonville businessman Bill Warner. The car show held annually in March is now considered to be among the premiere car shows on the planet.

While Charles Fraser might not have been the first person to see the tourist potential of Amelia Island, he did bring Amelia Island into the limelight we know today. The mark he left here is indelible as he forever changed the once sleepy town.

All images courtesy of the Amelia Island Museum of History.