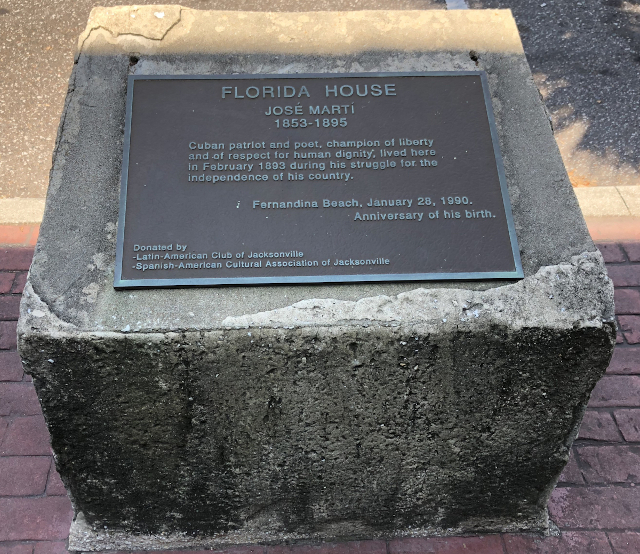 José Martí and the Fernandina Plan

Outside the front door of the Florida House Inn on South 3rd Street in Fernandina Beach, Florida, resides a column with a bronze memorial plaque. Commemorating the time when José Martí stayed there in February 1893, it reads,

and of respect for human dignity, lived here

in February 1893 during his struggle for the

independence of his country.

Anniversary of his birth.

This commemoration is tied to a larger story about his connection to Fernandina and Amelia Island. In January 1895, Martí and a group of supporters were on their way to Cuba via Fernandina, trying to filibuster.

From the Spanish filibustero, which means “freebooter,” filibuster has two meanings. Its more common meaning refers to the tactics used in delaying or stopping action in a legislature, such as filibusters in the United States Congress. The other definition is “to carry out insurrectionist activities in a foreign country.” From the 1850s until the Cuban War for Independence in 1895, Cuba wanted to be independent from Spain, and at times the independence movement had support from outside Cuba. The United States government made it illegal to filibuster or smuggle arms to Cuba. That did not stop the efforts of some of the more determined individuals. One instance of how filibusterers from America were treated was the Virginius Affair in 1873. The crew and cargo of the Virginius were captured, and ultimately the crew of that ship was executed by order of the Spanish government in Cuba.

The Virginius Affair took place in the middle of The Ten Years’ War (1868-1878) – one of the wars between Spain and Cuba over Cuban independence. The conflict was formative for young Martí. He supported the rebellion and was imprisoned and then exiled to Spain. He finished his education while in Spain, studying law. As the historical marker here in town says, he was a writer and a poet. He wrote newspaper articles in support of Cuban independence as well as poetry about freedom. He ended up living in New York City for fifteen years, his home base while he toured the United States to build support for Cuban Independence. He traveled up and down the eastern seaboard visiting and speaking to Cuban immigrants and communities, including stopping in Jacksonville and Fernandina in 1893. He was seeking support, both through money and sympathy, for his cause. However, he did not stop at using only his words. He intended to take guns to Cuba. He was planning to filibuster. Martí and a group of co-conspirators penned what was called the Fernandina Plan in 1894. The group would arrange for multiple ships to take men and arms to Cuba. With the help of Nathaniel Barnett Borden, a business owner from Fernandina who later built Villa Las Palmas, they chartered three ships: the Lagonda, the Amadis, and the Baracoa – all from northern ports. In order to not tip off the boats’ owners, the boat charters were made for “D. E. Mantell” – Martí’s pseudonym at the time – to “tour the West Indies.” The ships were to go to Fernandina and load supplies and weapons. In preparation, Borden had received and stored supplies and arms for the Fernandina Plan in his warehouse in Fernandina. Once the boats made it to the port and loaded the cargo from Borden’s warehouse, they would stop once more, each boat in yet another port, to pick up a combined estimated force of 1,000 men to go fight in Cuba. The last and trickiest part of the Fernandina Plan included changing the boats’ intended destination to Cuba. Once underway, the filibusterers would have to persuade the boat crews, or even hijack the boats and take control if necessary while remaining undetected.

Of the three ships, only the Baracoa and the Lagonda made it to Fernandina. The Amadis took on water as it was heading south, stopping for repairs in Savannah, Georgia. Only the Lagonda took on cargo because the captain of the Baracoa became suspicious of the situation, refusing to load any cargo without inspecting it, which was not according to the Fernandina Plan.

One of Martí’s conspirators, Colonel Fernando López de Queralta, contributed to the plan’s failure. He reportedly refused to operate without legal support and caused attention to be drawn to the boat charters through careless actions that ended up alerting the United States Treasury Department and their agents, even before the ships arrived in Fernandina. Yellow journalism – the popular sensationalist style of reporting prominent in the United States that was driven by the speed of the telegraph – was active in the early 1890s leading up to the Spanish-American War of 1898, and the American press played a part in spreading the information about the conspirators and the Fernandina Plan. With the telegraph, fast communication meant that if the Plan was found out, agents would be more quickly informed. The Collector of Customs, George L. Baltzell, was zeroing in on the conspirators and sending telegrams to his superiors all while the press was also investigating.

Though Martí and his compatriots sought to go and fight, they faced agents from the Treasury Department while in Fernandina. Because filibustering involved smuggling and was not just a form of freedom fighting, tracing and inspecting this activity and any suspicious cargo fell to those in charge of goods passing through ports. George Baltzell – as the Collector of Customs – was the local agent working for the United States Treasury Department. He was the main antagonist, chasing and investigating the Lagonda and the filibusterers while they were in Fernandina. The Florida House Inn in Fernandina in 2021. The top of the Martí plaque column can be seen at the bottom of the photo. Image courtesy of Jennifer England.

While Baltzell was investigating, one of the conspirators ordered the guns on the Lagonda thrown overboard to evade discovery. The arms were ruined, a loss worth $58,000. The conspirators left Fernandina and evaded authorities. Martí himself was in Jacksonville instead of in Fernandina at the time. He was not arrested and he also managed to travel back to his home base in New York City. Baltzell had not caught the filibusterers and was left with only a telegraph bill to pay for all his efforts.

After touring and speaking and raising funds for a few years, the Fernandina Plan demonstrated that Martí was actually doing something with the funds raised by his fellow Cuban patriots during that time. It showed that he could organize and execute a plan privately, without official support from another nation, in the pursuit of Cuban independence, even if it ultimately failed. It provided some hope for the Cuban independence movement.

Later in 1895, Martí did go back to Cuba. He fought at the Battle of Dos Ríos where he died on May 19, 1895. He may not have lived to see Cuba’s independence from Spain, but he was instrumental in bringing it about through his writing and his actions.

Note: all sources can either be found in the archives at the Amelia Island Museum of History or online (if a url is provided).